I’m not a doctor.

For the second time.

And I still don’t know why.

And though I’m not a doctor.

I plan on finding out why.

Why I’m suffering from PPD.

Because I believe there’s still so much we don’t know.

And I’m not the only one.

“It can come out of the blue and lay people flat,” says Dr. Samantha Meltzer-Brody, Director of the Perinatal Psychiatry Program at the Center for Women’s Mood Disorders in Chapel Hill, North Carolina. “And one of the big questions is why are some women vulnerable to postpartum depression and others are not? It’s often complicated and multi-factorial.”

“The goal is to really change the way we deliver care so that people don’t have to get sick at all which is, as you know, really horrific,” says Dr. Meltzer-Brody.

The first time around, I thought PPD was my fault. I thought major character flaws were to blame for my incessant worrying, frequent anger outbursts, profound periods of sadness and weeping, terrifying muscle tightness, heart palpitations, insomnia and intrusive thoughts.

If I can just get a grip on myself, I thought, everything will be fine.

So I did get a grip and worked on myself relentlessly. I took myriad self-development courses, improved my self-esteem, healed my inner child, changed my diet and meditated religiously. I became a yoga instructor, nutritionist, switched careers and weeded out the thoughts, beliefs, things and people in my life that were “no longer serving me”.

By the time I became pregnant for a second time in 2013, I felt at my best, mentally, emotionally, spiritually and physically. I took hypnobirthing classes and had a picture perfect natural birth. My baby was sleeping through the night from day one and so was I.

There’s no way PPD would ever find me now. 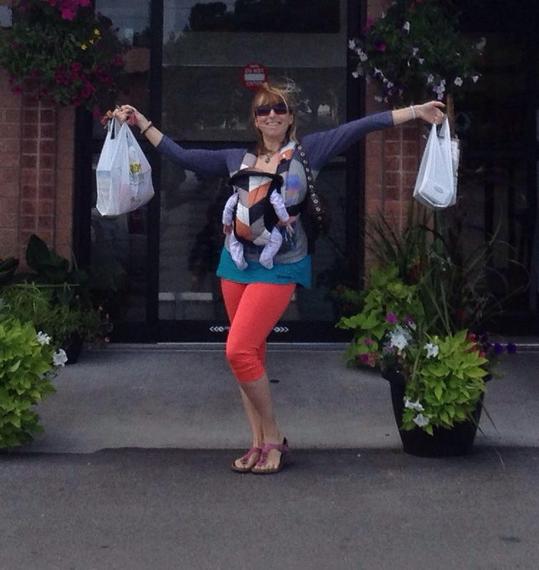 It was a huge lesson.

Though self-care is always a great idea, I discovered that a lack of Deepak Chopra in my life was not the reason I developed PPD. I mean, of course I felt better after focusing on my self. Downward dogs and kale smoothies would make anyone feel better.

The second time around, it came, as Dr. Meltzer-Brody said, out of the blue.

I was blind-sided, bushwhacked and caught completely off guard.

I was dumbfounded. How could this be happening?

I pulled out my arsenal.

I cut out gluten.

Day by day, the symptoms worsened.

If I didn’t do something soon, I’d end up in the mental ward.

So I swallowed my pride and my first SSRI.

I went on meds. And thankfully they worked.

I still have mild symptoms months later but they are nowhere near the severity I experienced prior to popping my first pill. Which then got me thinking:

If the typical environmental factors known to cause PPD such as lack of sleep, stress and feeling overwhelmed by the demands of a new baby didn’t pertain to me, nor did my own perceived causes of PPD including pre-conditioned thought-patterns, subconscious beliefs, immature emotions and a general bad attitude; then… what the hell was causing my PPD?

Turns out, the answer may lie in my genes.

In January, Dr. Meltzer-Brody will be able to tell me more about an international study she’s part of in which researchers will be collecting DNA through the spit of thousands of women around the world to try and understand the genetics that cause PPD.

“It’s not something that we can leak out now,” says Dr. Meltzer-Brody. “It is something that is going to be a large scale effort and so we are very excited about it and getting the details fine tuned.”

I tried to get more details but I also respect Dr. Meltzer-Brody’s request to keep things under wraps for the time being. Because it’s huge, right? Can you imagine if PPD is found to be a genetic condition?

“Anything that we can do to figure out how to change the way we screen and treat women who we can identify before they get sick and suffer with this is important as opposed to what we do now is we wait for people to get sick and then get the help we can find them,” says Dr. Meltzer-Brody. “I will be very excited to talk to you in January.”